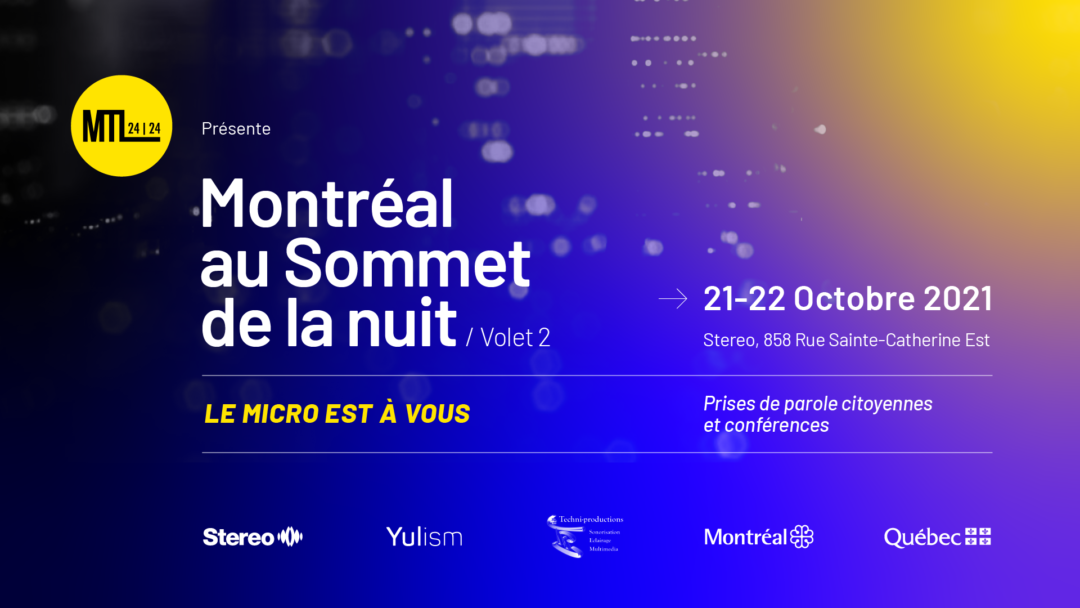 Montreal, Wednesday, September 22, 2021 – After a first edition that brought together specialists, speakers and lovers of nightlife from around the world last June, MTL 24/24 is very pleased to invite you to the second part of Montréal au Sommet de la nuit on October 21 and 22!

This second part of the Summit will put the spotlight on Montreal’s nightlife community in the hopes to stimulate a safe and healthy conversation around resilience, fundamental freedoms and civic responsibilities, and with the aim to reunite its players who have been apart for over 20 months now.

On Thursday evening, October 21, the MTL 24/24 Night Council will open the mikes to give the floor to the participants and promoters of Montreal’s nightlife to express themselves on the issues of local nightlife.

The following day, October 22nd, a series of conferences, workshops and presentations on nightlife, as well as a networking activity, will allow us to better understand the impacts of the pandemic on our community. The detailed program will be unveiled soon.

We invite you to join the movement within the walls of Stereo – a mythical nightlife venue and the only afterhour club left in Montreal! A perfect opportunity for the city’s nighthawks to be reunited with this beloved venue that they’ve missed so much!

The floor is yours but places are limited, reserve your tickets now!