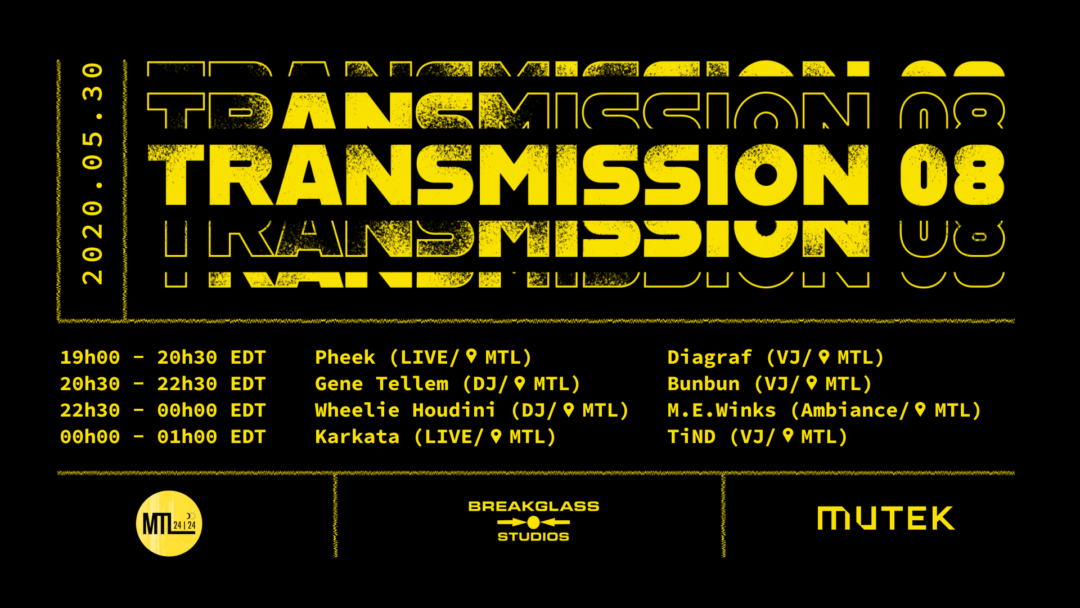 For the next edition of TRANSMISSION, MUTEK Montréal and the partners of Transmission MTL, Breakglass Studio and MTL 24/24, return with the eclectic and stimulating audiovisual performances of stupendous Quebec artists. An evening that will take you live from the ambient and the experimental dub to drone and techno music, including a selection of house sounds that are certainly captivating.

Pheek – Live
A flagship artist from Montréal’s electronic music scene since the late nineties, Jean-Patrice Rémillard (alias Pheek) has racked up an impressive discography, on top of founding his own acclaimed label, Archipel, through which he has advanced many fledgling talents.
https://pheek.bandcamp.com/music

Gene Tellem (La Rama) – DJ set
Whether taking centre stage as a DJ, party co-creator or producer, Gene Tellem communicates her own style of tweaked soul music through house and techno scripts, dedicating her productions to grooves for both nodding heads and wiggling bodies.
https://soundcloud.com/genetellem

Karkata – Live
With his signature fluid grooves and intricate harmonies, Montreal-based producer Billy Dalessandro digs into the liminal spaces between our conscious and unconscious minds with his new project Karkata which combines drone music and techno.
https://soundcloud.com/billydalessandro