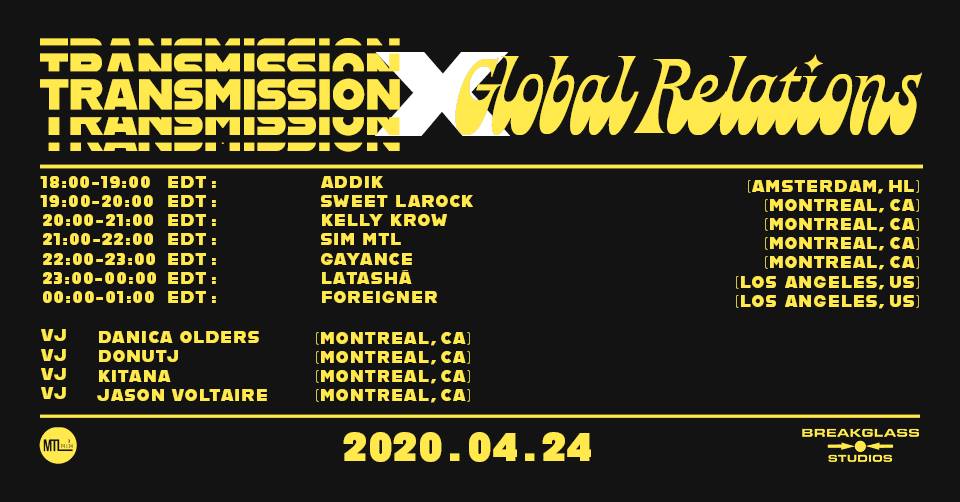 Addik, known as 1/5th of Amsterdam based ‘KD Soundsystem’, travels around the world exploring and expanding his musical grounds. The first steps in the world of dancehall brought him (alongside KD Soundsystem) in the middle of Kingston’s vibrant music scene. Marcia Griffiths, of all names, invited him and his companion over to the annual Bob Marley Birthday Bash in Jamaica’s capital. Exploring dancehall in Jamaica was just a first small step in a neverending story. Untill now, Addik travelled alone and together with KD to places such as Brasil, Cuba, The Gambia, South Africa, Senegal, Siërra Leone, USA and the UK. A show from Addik is always a surprise. Musically it varies from Dancehall to Afrobeats, Baile Funk to Soca.

Sweet La Rock started spinning on the wheels in 2011 doing family parties and private gatherings. Shortly after, through word of mouth, more and more people got to know about her. She’s known for bringing a good vibe to any events and playing the “feel good” music that everybody loves. Some of Sweet La Rock’s favorite music genres to play range from hip-hop to deep house, from soul to funk, and is not a stranger to many other styles like kompa, soca and afrobeats. With a name derived from a well-known hip-hop DJ, she is also recognized for her knowledge of old school classics. She is also DJ and host for CKUT 90.3 FM on Soul Perspectives every Tuesday night, an active member of Loudj Radio and End of the Weak MC Battle DJ. She’s part of different DJ collectives such as Amazon DJ Crew and Rap Goddesses.

Kelly Krow is a Haitian Canadian singer. He has managed to independently build his fan base and grow the popularity of his music & entertainment through social media. A recording artist and a renowned entertainer in his community. He sings in haitian creole, french and english. He is Known for combining « Afro pop » , « Zouk » & « Konpa » together.

21:00 EDT + 01:00 CET SIM (MONTREAL, CANADA)
« At first glance you get a sense that SIM is the type of producer that holds a strong identity and a clear vision for his sound. With an entire career ahead of him, he’s already a force of nature that could be unstoppable. SIM embraces forward thinking sounds and shares his new flavor with the Dancehall community, merging Jamaican classics with his influence of the UK Bass Movement. With 7 years of actively pushing a precise and ever evolving sound, SIM is set to be a pillar in the community for years to come. «

Gayance’s DJ sets are always a trek around the world. A full-blown pleasure cruise, in fact, with a killer selection of Caribbean & Afro-Brazilian Carnival, Baile Funk tracks and UK Garage, with influences ranging from Broken Beats to Detroit and New York House music. Then, when she does online mixes. GAYANCE started her mix series ‘’WITCHES BREW’’ on n10as where she tended to play Psychedelic 70’s Brazilian Rock, Samba, Haitian RaRa, Neo-Soul & LoFi Hip Hop beats. She was born and raised in Montreal, with Haitian roots, and she’s frequently named as one of the artists to put her hometown on the map. Tearing up venues in Paris, Berlin, Amsterdam, New York, São Paulo and Brussels one by one as she goes.

23:00 EDT + 20:00 PDT LATASHÁ (LOS ANGELES, USA)
Latashá is a rapper, singer-songwriter, recording and performance artist from New York City. Highly influenced by her diverse and eclectic roots, Latashá stepped into music with the vision to be the dark horse icon for her generation. After graduating from Wesleyan University, Latashá has engaged with crowds around the country and has opened for various artists like Big Sean, Kanye West, Princess Nokia to Kate Tempest. Latashá has toured festivals like SXSW, Afro-Latino Fest and Brooklyn Hip Hop Fest and is well prepared to perform around the world. She has recently headlined the Brooklyn Museum, The Shed and Le Poisson Rouge. As an unsigned artist, Latashá has flourished and grown her audience through her energetic, vulnerable, fun yet empowering music and stage performance. Currently, LATASHÁ is working on two upcoming projects “INSTAR” due May 2020 and “Chrysalis” due late 2020.

00:00 EDT + 21:00 PDT FOREIGNER (LOS ANGELES, US)
foreigner is an LA-based DJ born in Trinidad & Tobago and raised in Caracas & Brooklyn. His commitment to Panafrican philosophy positions foreigner as the creator and resident DJ behind of some of the wildest nuanced Afrodiasporic parties in Los Angeles.

Transmission MTL
tune in at www.twitch.tv/transmissionmtl

Global Relations
This is your inclusive getaway in the comfort of your home. Curated by Black Women from Montreal, Brussels and Toronto for the world to dance. Come as you are, be free. We take care of the entertainment with performances and sets from our friends around the world.

MTL 24/24
MTL 24/24 is a non-profit organization whose mandate is to promote nightlife culture and foster the development of Montreal’s night economy.