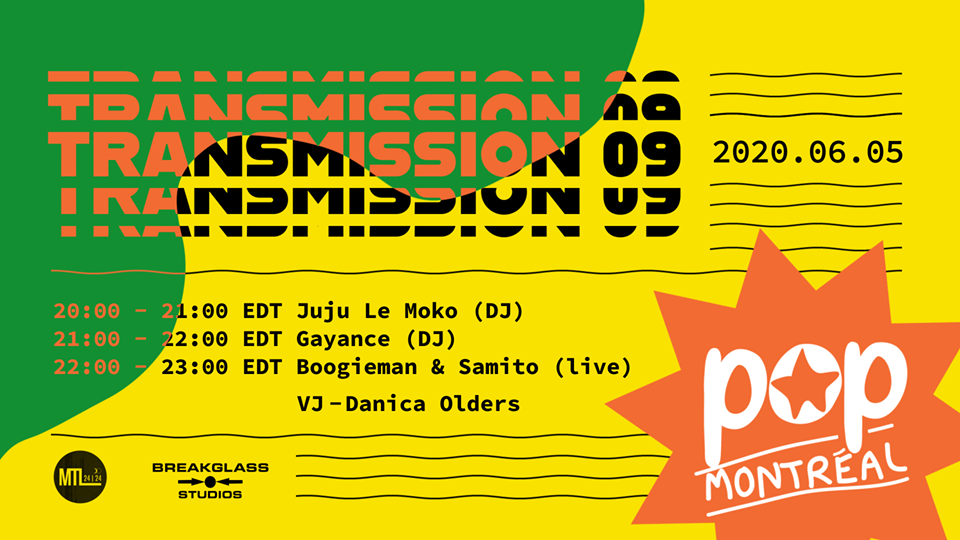 or on twitch at www.twitch.tv/transmissionmtl

As part of POP Montreal‘s Le Funhouse de POP Montréal, TRANSMISSION presents a special party broadcast sure to get you up and dancing from your living room, your backyard, the park, or your rooftop… to celebrate the end of the first day of Le funhouse programming!

featuring a LIVE set direct from Breakglass Studio by Boogieman and Samito and DJ sets from two of Montreal’s best Gayance and Julio Mendy (aka Juju Le Moko), the mission of the night is clearly get up and dance because despite social distancing, summer in Montreal is here! Creative direction, set design and live visuals for the party all by the amazing Danica Olders

Boogieman and Samito :
We at LADR and Fezihaus are happy to present Boogieman & Samito: an experimental and analog inspired dance music collaboration that has resulted in a genre they refer to as Kussom

Samito, first came to public attention in 2016 with his song “Tiku La Hina” on Costume Records. This record introduced the artist’s lively and versatile persona to the world and was streamed around the world propelling him into the global club scene and countless live stages. 2016/17 also saw the releases of “Cem Cem” on French fashion + music Label Kitsuné and the infectious “I Saw You” on Berlin über-cool tropical bass label Man Recordings. Ever since, Samito has consistently revealed more of his music, always laying into his many influences.

Boogieman and Samito’s new single ‘Tio Richie’ is coming out on all streaming platforms June 5th, right in time for Le Funhouse!

Gayance:
Gayance’s DJ sets are always a trek around the world. A full-blown pleasure cruise, in fact, with a killer selection of Caribbean & Afro-Brazilian Carnival, Baile Funk tracks and UK Garage, with influences ranging from Broken Beats to Detroit and New York House music. Then, when she does online mixes. GAYANCE started her mix series ‘’WITCHES BREW’’ on n10as where she tended to play Psychedelic 70’s Brazilian Rock, Samba, Haitian RaRa, Neo-Soul & LoFi Hip Hop beats. She was born and raised in Montreal, with Haitian roots, and she’s frequently named as one of the artists to put her hometown on the map. Tearing up venues in Paris, Berlin, Amsterdam, New York, São Paulo and Brussels one by one as she goes. Get ready to sweat.